An Evening of Laughter 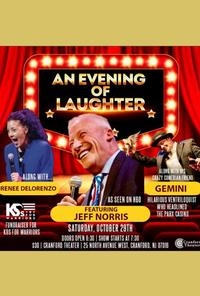 Jeff Norris: Jeff is an energetic whirlwind of comedy. He is a favorite in both Atlantic City and Vegas. He has also most recently partnered with Royal Caribbean Cruise Lines. Over the years, Jeff has appeared on numerous tv and film roles including HBO’s Boardwalk Empire and Oz, Good Morning America, My Super-Ex Girlfriend and Not Fade Away.

Jeff is one of the most quick witted acts working today-hardly pausing for a breath as he tears through his act, keeping the audience alert and in stitches from beginning to end. Jeff has been called a complete pro-one of the few remaining comics that understands the importance of showmanship and presentation.

Renee DeLorenzo: Renee is one of the most likeable and quick-witted comedians on the circuit today with her high energy observations about family marriage, sports , and everyday life... she will leave you in relatable laughter! Renee was also a finalist in the bud light ladies of laughter… a crowd favorite!

Gemini: A veteran of comedy providing the "Art of Laughter" for 30 years. A polished pro with amazing up to date magic and hilarious ventriloquism where the puppets seem to comically come alive! A favorite at The Borgata and Las Vegas.

A portion of the evening's proceeds will go to K9s for Warriors. Determined to end veteran suicide, K9s for Warriors provides highly-trained service dogs to military veterans suffering from PTSD, traumatic brain injury and/or military sexual trauma. With the majority of dogs coming from high-kill rescue shelters this innovative program allows the K9/warrior to build an unwavering bond that facilitates their collective healing and recovery.

Showtimes for An Evening of Laughter

CLICK ON A SHOWTIME TO PURCHASE TICKETS
SatOct 29
7:30p