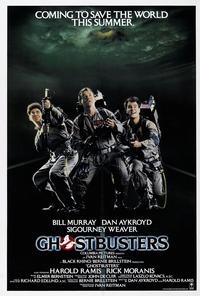 PG
Bill Murray, Dan Aykroyd, Harold Ramis and Ernie Hudson star as a quartet of Manhattan-based "paranormal investigators". When their government grants run out, the former three go into business as The Ghostbusters, later hiring Hudson on. Armed with electronic paraphernalia, the team is spectacularly successful, ridding The Big Apple of dozens of ghoulies, ghosties and long-legged beasties. Tight-lipped bureaucrat William Atherton regards the Ghostbusters as a bunch of charlatans, but is forced to eat his words when New York is besieged by an army of unfriendly spirits, conjured up by a long-dead Babylonian demon and "channelled" through beautiful cellist Sigourney Weaver and nerdish Rick Moranis. The climax is a glorious sendup of every Godzilla movie ever made-and we daresay it cost more than a year's worth of Japanese monster flicks combined. Who'd ever dream that the chubby, cheery Stay-Puft Marshmallow Man would turn out to be the most malevolent threat ever faced by New York City?

CLICK ON A SHOWTIME TO PURCHASE TICKETS
SatOct 29
4:00p