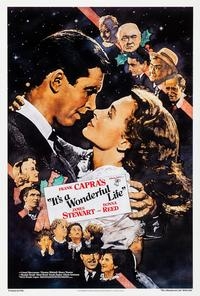 NR
George Bailey (James Stewart) has the picture perfect life: a loving wife, Mary (Donna Reed), four young children, and his own business, which he inherited from his father. However, on Christmas Eve, George encounters severe business difficulties at the Bailey Building and Loan. George's Uncle Billy (Thomas Mitchell) loses the cash they owe the bank, which is owned by the Scrooge-esque Mr. Potter (Lionel Barrymore). This leads George to a life crisis, and he contemplates suicide. He's saved at the last moment by the apperance of his guardian angel, Clarence (Henry Travers). Clarence shows George how much his life means by showing him how the world would be without him. It's not pretty; his cheerful, friendly town is dreary and impoverished. Finally, George is convinced and Clarence returns him to the world as if nothing had happened. George goes home to find the entire community gathered at his house to raise money for his consistently philanthropic loan business. Even Mr. Potter's accountant donates money to the cause. The movie concludes with George's brother, Harry (Todd Karns), bursting in the door, back from the war. As the whole community sings "Auld Lang Syne," a bell rings, telling George that Clarence finally achieved his goal as an angel and obtained his wings.