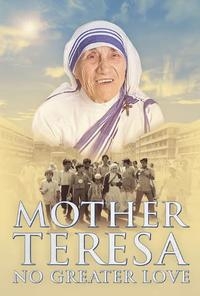 NR
Twenty-five years have passed since the death of Mother Teresa of Kolkata, sparking a renewed interest in this spiritual giant of the 20th century. Countless books have been written and films produced on this modern Saint, the diminutive and indomitable Albanian religious sister who seized the world's imagination through her dedication to serving the poorest of the poor; first in the slums of Kolkata and then throughout the world. However, never has a film taken viewers on the incredible journey of her life as they will experience in Mother Teresa: No Greater Love. Filmed on five continents and featuring unprecedented access to both institutional archives and the apostolates of the Missionaries of Charity, this film is a breathtaking visual tour de force. From ministry to the homeless of the South Bronx to the critical aid for Venezuelan refugees along the border of Brazil; from outreach to the poor of the far-flung reaches of the Amazonian jungle to caring for disabled children in the slums of Nairobi, Kenya; from the loving care provided to the drug addicts on the outskirts of Rio de Janeiro to the ongoing work of the Missionaries of Charity for the sick and dying in Kolkata - this extraordinary film reveals not just who Mother Teresa was, but how her singular vision to serve Christ in the poor continues to be realized through the Missionaries of Charity today. This is far more than a documentary film. It is at once a soaring tribute to a spiritual icon, a powerful witness of authentic Christian charity, and a guidepost for all who seek hope in our turbulent times

CLICK ON A SHOWTIME TO PURCHASE TICKETS
TueOct 4
7:00p